I’m sure you’ve heard of the Internet… right? Duh. Well, simply put, it’s a big huge network that’s changing humanity. Does that Jog your memory? Now the real question is this: do you know the difference between the Internet and your WiFi network? If you don’t, stay calm and I’ll explain. I’ll do my best to put this into laymen's terms. There will be a few concepts introduced, but for the most part I teach in visual metaphors - so I’ll do my best to help you understand.

If I can get you to remember one thing, it’s this: WiFi and the Internet are two completely separate beasts. If you can remember that moving forward, then half of my job is done.

The Internet is a Language

The Internet is a way for one computer to talk to another - an internet lingo. They call this the Internet Protocol. This language allows your computer to send and receive information to and from another computer. Without that protocol, even if two computers were connected with a cable, they wouldn’t be able to understand each other. Like speaking with someone in Chinese on the phone - the connection is there - but if you don’t understand the language, then there’s no way you’ll ever be able communicate.

The second aspect of the Internet is how that data actually moves from one place to another. Now here’s where it gets a little more complicated. I’ll start with an example. When you send an email, you’re using the Internet to move that photo of your dog from one computer to another. Sounds about right, but how does it actually do that?

Okay, you’ve typed out that shiny email to your boss and are about to send it off. When you click "Send," that email is shot through the Internet tubes of society and lands on another computer somewhere on the Internet. This computer is associated to your specific email and is called the server (remember that term). Your server then pushes your message to your boss’s server (also associated to his/her particular email address), which in turn pushes the email to their work computer. 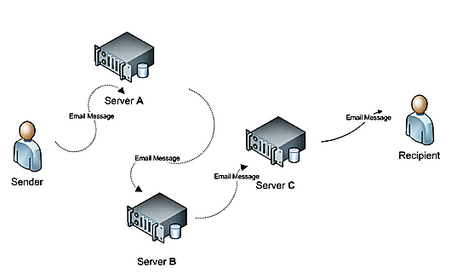 This is how email works!

Still with me? Let’s break that down a little. A server is a computer thats sole purpose is to connect your computer to your boss’s computer. It lives to serve. Each server has a unique address on the Internet and that address is called its URL. So, when you type facebook.com like you do everyday, you’re really just accessing another computer owned and operated by Facebook.

However, the server isn’t technically the Internet. The Internet is what’s in between your computer, your server, your boss’s server and your boss’s computer. It’s the "net" that ties them all together and it's also the language that computers use to speak amongst themselves.

Your Internet service provider, or ISP, simply provides the cable that goes from your house to the Internet. Companies such as Comcast, Clearwire and CentruyLink are common ISP's. They’re the ones that make that physical connection to the web.

From that Ethernet jack in the living room, you’re going to plug in two devices. One is called the modem and the other is called the router. The modem is used to translate the Internet signal from the outer world into a native language your computer can understand (don’t worry about this one) and the router is like a little tiny, itsy-bitsy radio tower that broadcasts WiFi throughout your home. 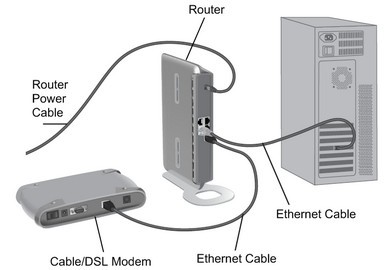 So, Wifi Is Just A Radio Signal

Here is the differentiating factor between the Internet and WiFi. If Internet allows you to access information from other computers across the world using a specific language (protocol), then WiFi is just a way of connecting to that wire in your living room wall and out to the Internet, wirelessly.

Okay, imagine a radio tower, broadcasting the latest 40 pop songs to cars all over the city. Now, imagine that radio tower is the size of a lunch box and each car is a different WiFi enabled device (iPad, iPhone, Mac, etc) living in your house. Now imagine that instead of the same 40 songs over and over again, that lunchbox (router) is broadcasting the Internet to your devices. You’re no longer imagining things, this is reality.

When you see those WiFi bars on your iPad in the top-left corner of the screen, your iPad is totally jamming out to the pop songs that are the Internet - but is it really? Well, not necessarily.

You Can Be Connected To WiFi, But Not The Internet

The radio tower that is broadcasting its network throughout your home will not stop broadcasting its signal if the internet is no longer being fed to it. For example: you go onto Safari on your iPad with connected WiFi and you type in facebook.com. Then, you get an error message! It says something like: “cannot find server” or “you are no longer connected to the Internet." As long and hard as the iPad might try, it will never connect to Facebook. You now know that it’s probably something to do with your ISP and not your router. The WiFi network may be functioning in your home, but there is no Internet connection. Why? Because your iPad is tuned to the correct radio station, but there’s no music for it to hear.

Devices can, however, communicate with each other over WiFi without the internet. They’re all basically using their own little HAM radios (remember those?), using code to tell each other different things on certain radio frequencies. “CQ CQ Calling CQ. This is AD5UAP, Alfa-Delta-Five-Uniform-Alfa-Papa” (As one would say via HAM radio to identify themselves). Another device responds: “N2EEC N2EEC, this is AB2GD, Alfa-Bravo-Two-Golf-Delta.”

Like an amateur HAM radio setup, WiFi doesn’t travel great distances like a full-blown commercial radio station, or your cell network that your phone connects to. WiFi usually stays within the range of a normal sized family house, about 150-300 foot radius depending on how many walls and obstacles are in the way. However, due to a variety of factors beyond the scope of this article, WiFi can push information much faster than any network that Verizon or AT&T can support from space. For that reason, it’s beneficial to be connected to WiFi whenever possible. Save that precious data on your cellphone bill for when you need it most.

Thanks For the Insight, But How Can I Actually Use This Information?

Well, dear reader, there’s a lot I didn’t cover and a lot more complex scenarios that change some of these factors. Overall, if you can remember that the Internet is a language, and your WiFi is a radio station and they’re two fully separate bodies - then some issues you run into while connecting (or not connecting) to the Internet will be much more clear.

Is there anything that isn’t clear? Do you have any questions about what all this means? Drop us a comment below!